As impressed as we were by our divine bus trip to Fatima and the heavenly decorum of the religious festivities, we found that all hell broke loose once we got back to the bus station.

Frank and I held pre-purchased, roundtrip tickets identifying our bus and seat numbers. We expected the small-town station to be crowded so we arrived a little early. It was a wall-to-wall madhouse. Frank elbowed his way inside to check the monitor. Was our bus running on time? The monitor was black.

He circled around outside and found three queues along the back wall adjacent to the lot  – Porto, Coimbra, and a wider one for Lisboa – all crammed with people. He came back to get me, “We better get in line.” 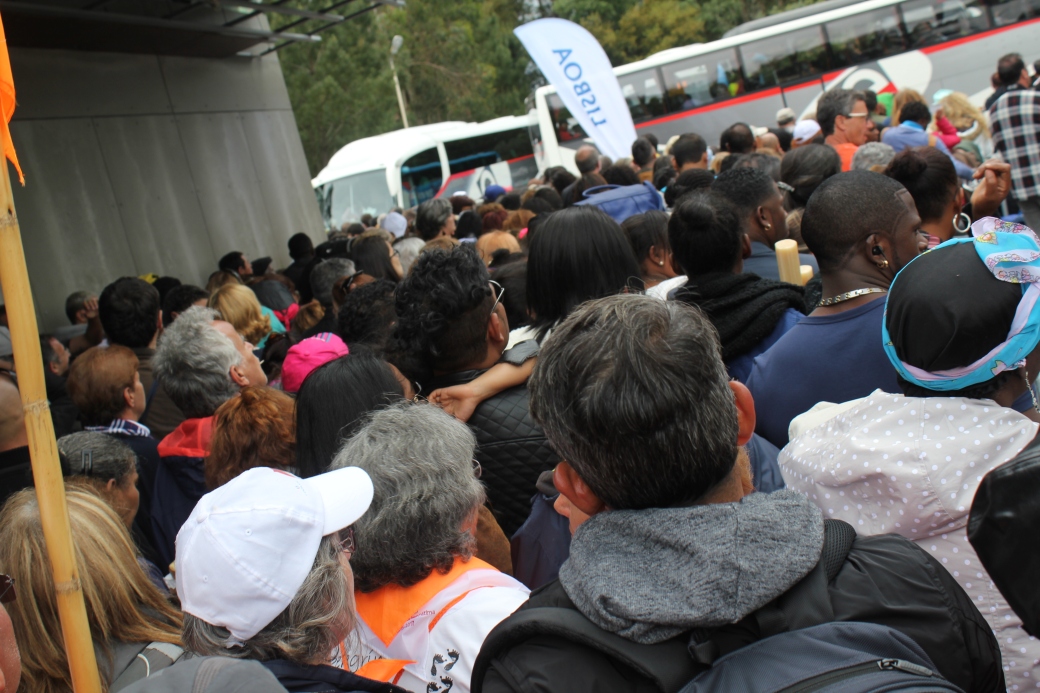 We found that, for today, our reserved ticket didn’t mean a reserved time and seat — all it guaranteed was a ride to Lisbon, first come, first served! The queue of hundreds was claustrophobic and slow moving. And then it rained.

As buses flashing their destination arrived, those at the front of the specified line rushed out while the bus backed in and the driver opened the door. There was no bus staff controlling the number. The buses held fifty and those that didn’t make it on remained in the lot.

Another bus marked Lisboa arrived and, all at once, EVERYONE from our queue surged into the lot and pressed to get onboard!!! Soon, there were thousands of people, jammed like sardines, in this tiny parking lot that held maybe six buses!

The hysterical mob blocked and rushed any incoming bus. People were shoving and yelling. Little old ladies were crying.

Bus staff and some National Guard finally muscled their way through and tried to restore order. There was none to be had. Somehow, they were able to clear a tight corridor for a couple buses, but they continued to have them back in! I still can’t believe no one got run over. If you were lucky enough to be by a bus when the driver forced the door open, you might get a seat. 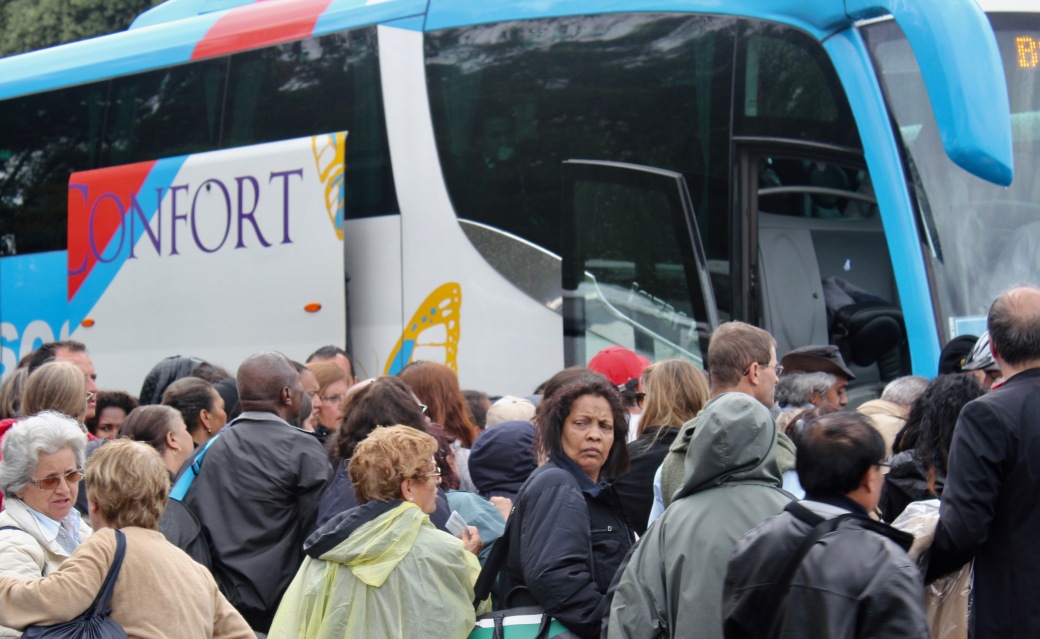 The guards and staff were powerless. Angry ticket-holders were screaming and tempers were flaring on both sides. Buses couldn’t get in or out. It takes a lot to get me panicky but I knew this was going to get MUCH worse before it got better. I looked at Frank, “I don’t care what we have to do, we’re out of here.”

We left the mayhem and viewed a mile+ of empty buses backed up along the street leading into the clogged station. We knew we’d be lucky if we got home by morning!

Frank and I ducked into a nearby hotel. After much effort, the kind staff tracked down a taxi driver who would take us the 80 miles back to Lisbon. It was expensive but so worth it — we were home and safe an hour-and-a-half later.

Note: This post is purposely out of chronological order as I did not want anyone to get the idea that this incident, in any way whatsoever, tarnished our two days in Fatima. In our minds, the two events are completely compartmentalized. That said, it was something we experienced as part of our adventure as a whole. When traveling, you inevitably come across obstacles and challenging situations and you have to make adjustments.

2 thoughts on “Bedlam at the Bus Station”