As we say farewell to Lisbon, here are some things you may not know about Portugal and a few more favorite sights . . .  Muito obrigada Lisboa, até a próxima (Thank you very much Lisbon, see you next time!)

Saint George’s Castle can be seen from almost everywhere in the city.

Its oldest sections date from the 6th century, when it was fortified by the Romans, Visigoths, and eventually the Moors.

The castle was the ancient seat of power for over 400 years. Much of the present castle dates from the 1920s when a significant restoration project was undertaken.

The views from the castle are spectacular.

Lisbon is built on seven hills. It’s very walkable but those walks can be tiring!

The architecture is picturesque . . .

even the prisons are pretty!

There are many transportation options, including the iconic trams.

Tram #28 is recommended for visitors wanting to explore old Lisbon . . .

but we found it claustrophobic.

A recent addition to the transportation network are the tuk tuks. The locals find them annoying.

We were big fans of the trains and metro, which were clean and efficient.

Alfama is conglomeration of narrow streets that stretch from the River Tagus up to the castle and is the oldest section of the city. Alfama was originally the poor slums outside the city walls . . .

but today the area is fashionable and trendy. It looks similar today, except they didn’t have cruise ships back then!

Lisbon is know for its fado houses, featuring the traditional folk music.

Parts of Portugal are very modern.

Like most other European cities, there are countless public squares.

One day, the square by us, Martim Moniz, was the sight of a big religious festival.

81% of Portuguese are Catholics.

They have a special reverence for the Blessed Virgin . . .

and for St. Anthony of Padua, who was born in Portugal.

The 25 de Abril Bridge connects Lisbon to the municipality of Almada on the south bank of the Tagus River. The Cristo Rei statue overlooks Lisbon from Almada.

As you’d imagine, there are many beautiful churches in Lisbon, including the Basilica Estrella.

The 12th century Sé de Lisboa (the Cathedral) is Lisbon’s oldest building and one of its most important religious sites.

Sacristy of the Cathedral

To the rear of the Sé are the ancient cloisters, which were constructed directly on top of a ruined mosque and symbolically confirmed the 13th century Catholic conquest of Portugal from the North African Moors.

This rose window was painstakingly reconstructed during the 20th century from fragments of the original window that was destroyed by the powerful earthquake of 1755. The earthquake also caused the roof to collapse on hundreds of worshipers who were packed into the cathedral to celebrate the feast of All Saints.

Cisterns of the Monastery

The hauntingly sad graves of King Carlos I and crown prince Luíz Filipe are mourned by the Queen.

The outside and inside walls of the monastery are adorned with Portuguese tiles.

We spent hours going through a series of panels illustrating scenes from LaFontaine’s Fables, along with their explanations.

Pantheon (Panteao Nacional) eight “greats” are buried here and there are monuments to others.

Did you know Portugal produces half the world’s cork?

The Rooster of Barcelos (Portuguese, “Galo de Barcelos”) is one of the most common emblems of Portugal.

Portugal is also known for sardines. 60% is consumed fresh, the bigger and fatter the better.

Salted cod or bacalhau is a very common dish throughout Portugal and it’s said there exists at least one recipe for each day of the year!

It took me a while to get Frank to try the ubiquitous pastel de nata—custard tart—but I enjoyed them often. They were soooooo good! 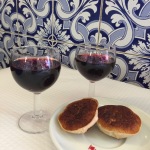