When your legs ache from all that hiking or skiing, Bozeman is a charming, colorful city with much to offer. Whether your interests lie in unique art spaces, team sports, museums or walkable old neighborhoods, you’ll never be at a loss for something to do.

Main Street has enough restaurants and shops to keep you full and broke from morning to night.

Love the outside of this shop…

The Ellen is a charming old theatre where they feature old films, often with talks.

There’s always something happening downtown, like a political rally . . .

or Music on Main, a weekly family friendly event.

We were here for the 4th of July fireworks and were amazed that anyone could light fireworks in their own yard!

The city is colorful. All the utility boxes are painted, many complimenting their surroundings.

Outside Bozeman’s beautiful new library is an outdoor sculpture garden.

The Emerson, a former school, is an art and performance space.

The classrooms house galleries and workshops.

The local cemetery is well groomed and monuments are often very artsy.

Look what I found!

Museum of the Rockies is a world class museum.

They have a great collection of Old West memorabilia and dinosaur bones. We enjoyed their fascinating special exhibit on dinosaur cousins – crocodiles!

They even had live specimens!

Bozeman has many historic homes. The neighborhoods are walkable and the people are friendly.

Our favorite neighborhood was Elk Grove, where we hung out with these friendly girls!

Or here is a happy guy and his happy dog!

Bozeman is home to MSU and the whole city is Bobcat football crazy!

They close the busy street in front of the stadium for tailgaters.

They even changed the Mass time at the college church so the parishioners (and priest!) could be there for kick-off!

We were never at a loss for good restaurants, on or off Main Street.

Our favorite was this little food truck, run by a young couple.

Their Wednesday special was phenomenal.

And if you ever run out of things to do in Bozeman, Livingston is just over the Pass.

This year, the western United States experienced a record number of terrifying and destructive wild fires. We watched the nightly local news as they updated locals on fire conditions, air quality, road closures and cancelled activities. In Bozeman, we could smell the smoke in the air and we saw our mountains disappear in the haze. The fires caused us to revise our travel plans to Glacier National Park. We are leaving later than planned and are choosing an alternative route. The lodge we planned to stay at has closed early for the season due to nearby flames. No doubt, what we will see may be different than what we would have months ago but I’m sure it will still be memorable! 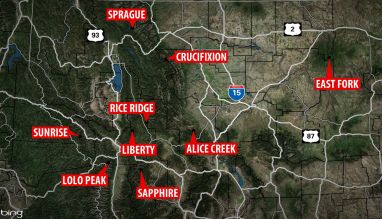 In addition to the smokey air, the view of our mountains has been affected by the fires. 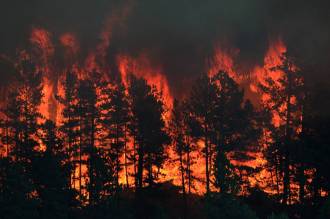 Most people associate Bozeman (and Montana, in general) with beauty. Vibrant images of Yellowstone, the gentle grace of fly fishing in “A River Runs Through It” and the thrill of skiing through deep powder at Big Sky bring to mind all this year-round recreation paradise has to offer. I confess to not being a “winter person,” although I’ve been known to enjoy my blue and green runs skiing Bridger and Big Sky and getting lost in a good book while curled up near a roaring lodge fire. But for me, Bozeman is best experienced when the weather turns warmer. From the blooming of the mountain flowers to the harvesting of the golden wheat fields, our summer in Bozeman has left us in a constant state of awe. Each turn of a trail delivered a unique perspective and the proud collapse at the top of a mountain was rewarded with stunning and ever-changing vistas. In closing out our 2017 adventure in Bozeman, I will attempt to share some of what we experienced. Although it’s hard to capture completely, I can best express our journey through some photos. Enjoy!

When we arrived in June, the days were relatively cool. There were many hiking trails accessible from our apartment on Main Street and everywhere you looked you were surrounded by majestic mountains!

Jordan and Grace took us up to Fairy Lake.

We went past the Bridgers, which were still capped with snow.

The paths had snow and the water was cold . . .

but Jordan checked off a bucket list item after he plunged in from a rope swing!

We also went up toward Big Sky.

We did the hike to Ousel Falls, a trek we had often done on past trips.

The rivers were running very fast due to a wet spring.

Frank and I hiked Drinking Horse

It was pretty steep!

From the trail, there were wide views of Bozeman.

This is the same view in early September when everything was dry.

A favorite place is Hyalite Reservoir

We went to Hyalite a few times, once with Jenny’s family.

Jenny and Aaron at Hyalite

This is my first time standing on the paddle board!

Frank and I took a ride to Cable Ferry Lake to see the dam.

The dramatic June-September contrast was most evident on the hike we took often. Pete’s Hill started at the library on the east end of town.

and the views were spectacular.

This is near the same spot in September!

The mountains are almost invisible because of the year’s awful, nearby wildfires

We loved the 2-hour hike as it was convenient and had just the right amount of challenge.

We saw many friendly folks with their happy dogs on the early segment of the trail.

The latter portion had fewer hikers but once in a while, we’d be joined by cows!

I’m going to let the mountains give you an interesting timeline: Our arrival in June. Weather is a bit cool and the mountains are still snow-capped.

Early July, it’s really warm and the mountain snow is pretty much melted.

Late August, it’s hot and the mountains are nearly invisible due to the smoke of nearby wild fires.

The weather went from the 80s to the 40s in a matter of days. Heavy rain will hopefully help the firefighters and the cooler mountain tops and passes got snow last night! (September 15)