To say Calgary was not what we expected would be an understatement. First of all, did you know the population is 1.3 million? It is Canada’s third largest city and the fastest growing — the population has increased almost 38% in the past twenty years!

The two things I knew about Calgary before we went were that it hosted a winter Olympics and that it was nicknamed “Cow Town.” Canadians also refer to it as the heart of the “New West.”  It was anything but the sleepy cow town we expected!

Calgary is a vibrant, modern city of skyscrapers and great neighborhoods. There is a lot to do and see and it’s easy to get around. Plus, it’s only three hours from Banff. Honestly, if it wasn’t for the snow, Frank and I could see ourselves settling down here (SOMEDAY!!).

I had planned to do just a couple small blurbs from each city and sight as we traverse  across Canada but Calgary deserved its own page. It was THAT impressive!

We were surprised by the view of Calgary as we drove in.

Our airbnb was in an area adjacent to downtown called “The Mission.”

It reminded us a little of Milwaukee’s Brady or Downer neighborhoods with older homes . . .

and a bustling street with . .. 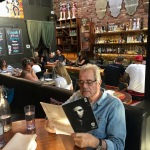 and a lot of good restaurants . .

There were a lot of young people.

Just down the street from us was the Elbow River Parkway.

We were also within walking distance of downtown.

Because of the cold weather, overhead walkways connect most buildings.

Parking is an issue and there are many “Go-cars.”

I got a kick out of the grates, which helped those wearing heels to get safely across!

He even made some when we went to the Chinese Cultural Centre!

He told them all about his travels to China.

Calgary’s most famous skyscraper, the Bow.

In front of the building is the iconic sculpture, the Head.

We also walked over to Eau Claire Park . . .

The parks sit along the Bow River.

The Peace Bridge over the Bow River was designed by Calatrava.

The Winter Olympics were held in Calgary in 1988. A little park in downtown is the Olympic Plaza.

While we were here, Frank swam at the Repsol Centre, an Olympic venue.

Olympic Park is operated by Winsports.

Calgary has done an awesome job of utilizing all the former venues and this place is a perfect example.

The original bobsled of the Jamaican bobsled team!

All in all, Calgary was a truly remarkable city. The best of city life . . .

If only it didn’t have winter!