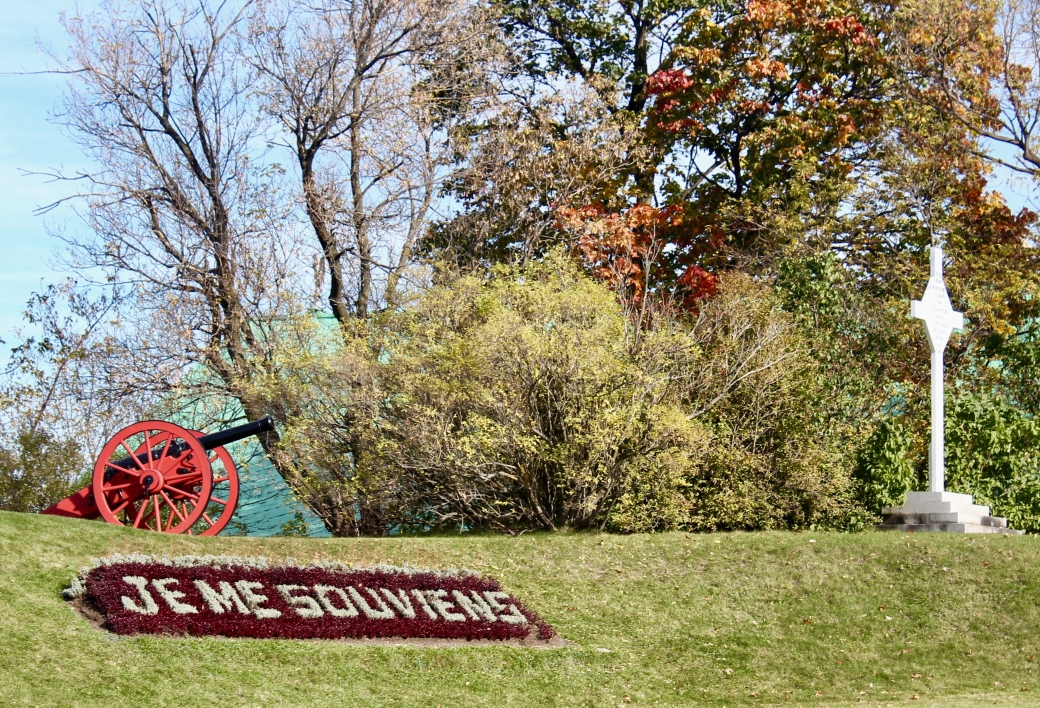 Je me souviens is the official motto of the Quebec province. You see it throughout  government buildings and on car license plates. Translated into English, it simply means “I remember,” but paraphrased, “We do not forget, and will never forget, our ancient lineage, traditions and memories of all the past.”

Staying in Old Quebec, or le Vieux-Quebec, Frank and I felt immersed in that past —  cobblestone streets, European architecture, historic neighborhoods. Quebec City is the only walled city north of Mexico. Our apartment was located just inside the wall and our front window faced one of the arched gateways that divide old from new. Horse-drawn carriages clip-clopped down our street.

We absorbed the past that was “New France” through tours, talking with locals and a lot of walking. Visiting the Parliament building gave us historical perspective and taught us about current political processes. A Jesuit priest and an Augustine nun explained the important roles their religious orders played in New France’s academic and medical development (respectively). Quebec’s religious and military past are intertwined and, as we explored, we couldn’t help but comment on the proliferation of two seemingly opposing concepts: many, many churches and many, many cannons. Often times, they were right next to each other!

Frank and I were pleased to observe the impressive efforts made to preserve the city’s original architecture. Sixteenth and seventeenth century government buildings, homes, schools and churches are extremely well-maintained — and often repurposed as you will see in some of the photographs.

Much of the explanatory signage, brochures and websites is in French. In 1977, the Charte de la Langue Française made French Quebec’s official language. The law requires that public signage is predominantly in French and that immigrants send their children to French-language schools. Currently, 95% of the population speak French as their first or second language. Being in the more touristy areas of Quebec City, we found that most people we dealt with, in stores and in restaurants, spoke some English. And, of course, we did our best to speak some French.

So, in addition to our history lessons, the incredible sights and my feeble attempts at remembering some high school French, what else will we remember from our stay in Quebec? First of all, we rarely needed our car. Quebec is fairly compact and very walkable — but beware, some of the hills in the upper part of the Old City are extremely steep! Second, there is an abundance of restaurants but aside from buttery croissants, some yummy crepe breakfasts and a little Italian place with great pasta, we were underwhelmed by the food. Neither of us are big fans of meat pies or maple pie (and we still haven’t tried the ubiquitous poutine!). Third, I mentioned it before but the repurposing of old buildings really made an impression on me. The churches transformed into libraries blew me away! Finally, I never imagined that a city so close to home could remind me so much of Europe. I will never forget the city’s charm and beauty. Je me souviens du Quebec! We will always remember Quebec!

The wall of Vieux Quebec (Old Quebec): Quebec City is the only walled city north of Mexico.

The wall bordering the Upper Town of Old Québec is close to 2.8 miles in length.

Our apartment faced the wall from inside the Old City.

Our view at night

Quebec City is built on two levels. Our place was in the Upper Town.

It was in the Lower Town that Samuel de Champlain founded Quebec City in 1608.

Today the area, called Petit-Champlain is swarming with tourists.

Upper and lower Quebec is connected by a funicular, originally built in 1879. (Preferred mode of transportation versus dozens of steps!)

Like many old European towns, at the center is a square with a church. The 17th century Notre Dames des Victories is the anchor of Place Royal.

There is also a Notre Dame in the Upper Town.

Walking around the Upper Town can be a challenge with its many steep hills.

This arched gate leads into Rue Saint-Jean, a popular tourist shopping and restaurant street just down the hill from our apartment. This is where we usually went to eat . . .

The 200-year-old Dufferin Terrace overlooks the Lower Town and the St. Lawrence River.

The Château Frontenac is the capital’s emblem and most visited attraction. The hotel is currently operated by Fairmont Hotels.

We didn’t stay there but did spend a rainy afternoon drinking coffee and enjoying dessert!

Parc Montmorency. Walking the upper and lower towns was a history lesson in itself, but we wanted to learn more.

We took a tour of the Parliament Building, or Assemblée Nationale, home to the provincial government. The structure was completed in 1886.

Here we learned about the three modern periods of Quebec history. New France was colonized by and ruled by France from early 1600s to 1763. In the 1763 Treaty of Paris, New France ceased to exist and the area was officially transferred, under the name of Canada, to the British. The Canadian Confederation was the process by which the British colonies of Canada, Nova Scotia, and New Brunswick were united into one Dominion of Canada on July 1, 1867. This year marks the 150th Anniversary of the Confederation.

Just outside the wall and across from Parliament is a large urban park. The Battle of the Plains of Abraham took place here in 1759 between the French and the British. The battle lasted just fifteen minutes but the outcome was pivotal. The British won and took control over Canada from the French.

At the far end of the park, overlooking the St. Lawrence, is the Citadel. The star-shaped fortress will celebrate its two hundredth anniversary in 2020. Though the site was originally a 17th-century French fortification, the current Citadelle was built by British Royal Engineers and the Royal 22nd Regiment in 1920.

Views from the Citadel are amazing!

A heritage attraction, the Citadel is still an active military instillation.

It is also home to the Governor General and has been since 1872.

We noticed there was no mention of the Indigenous peoples in that timeline but a visit to a nearby church took us back to the early days of colonization.

Two doors down from us was a locked chapel with a sign indicating it was Jesuit-run. We were curious and contacted the pastor, Marc Rizzetto, who invited us for Mass and a tour. They were in the midst of restoring the space but it remained quite beautiful. The Mass was in French but the young priest acknowledged his English-speaking guests with a warm welcome and some English in his sermon.

In the church, was a statue of the eight Jesuit martyrs. We had seen other statues and references to the martyrs throughout our visit.

The Canadian Martyrs were Jesuit missionaries who worked among the Huron people. They were ritually tortured and killed on various dates in the mid-17th century during the warfare between the Iroquois and the Huron.

In 1635, the Jesuits began construction of the first college for boys in Québec City, located where the City Hall stands today. Before the English Conquest of 1759, this educational institution was the only college in the North American colonies.

In the Battle of 1759, the college was requisitioned for military purposes. The British authorities closed down the college in 1763, an action that prevented the Jesuits from recruiting for their community. An arrangement was made that when the last Jesuit living in Canada would pass away, all the community’s possessions would be handed over to the Crown. In 1800, the death of Father Casot marked the end of this religious order in Canada.

In 1842, the country saw a rebirth of the Jesuit community in Quebec. The new wave of priests and brothers founded Saint-Charles-Garnier College in 1935. Currently, the Jesuit order in Quebec continues to grow.

Around the same time the Jesuits were building their first school in the early 1600s, three French nuns arrived in New France to set up Hôtel-Dieu, the first organized medical facility in North America.

The Augustine Sisters developed and ran twelve hospitals up until 1962. In the early days, hospitals were for the poor. Doctors went to the homes of sick rich people, until the advent of private hospital rooms.

Sister Marie-Catherine of Saint Augustine was a nursing nun in the community. She has been declared “Blessed” and is on the path toward sainthood.

The cloistered community devoted themselves to caring for body and soul but now the government runs the hospitals and the order’s numbers are dwindling. They have, however, come up with a unique plan to continue their mission of care and devotion.

The Sisters have converted their monastery and chapel into a hotel that offers care and wellness. The public is invited to disconnect and recharge. What’s more, rooms are discounted for caregivers whose loved ones are in nearby hospitals.

Another place of healing is the Shrine of Sainte-Anne-de-Beaupre, just north of Quebec City.

In 1658, Louis Guimont, suffering from excruciating back pain, came to help with the construction of the first chapel. He was miraculously healed and his would be the first of an endless series of healings.

Good Saint Anne you carry in your arms your daughter Mary. As you have done for her, give us the grace to welcome the love of the Father in our lives and help us to share this love with one another. Ask your Grandson Jesus for the joy of His Holy Spirit so that when we return home, our hearts are filled with these words of Jesus, “That my Joy may be in you.”

More Quebec history can be found on the Île d’Orleans, one of the first settlements of New France in the sixteenth century.

The island is divided into six townships, dating back to 1661.

Driving around the Île d’Orleans, you will discover historic homes . . .

You’ll also see some old sugar shacks. Canada produces 71% of the world’s pure maple syrup, 91% of which is produced in Quebec.

We discovered a little church that we think was attached to a nursing home.

In the woods, they had stunning mosaics of the Stations of the Cross.

Just across the bridge from Isle d’Orleans is Montmorency Falls.

The waterfalls are 272′ tall, a full 99′ higher (but not wider than) than Niagara Falls.

After heavy rains, we witnessed the contrast in the power of the falls. The Montmorency Falls flow into the Saint Lawrence, which leads us back to Quebec City . . .

We had been down by the water to see the ferries, which go back and forth between Quebec City and the city of Lévis.

The port area is nice with a walkway along the water.

We watched a sailboat travel through the lock between Quebec City and Deschaillons, a difference of 37 feet.

The Grande Allée is a main thoroughfare outside the Old City, between Parliament and the Plains of Abraham. It is a vibrant area of bars, restaurants and fancy homes.

The segment of Rue Saint-Jean outside the Old Town was less crowded but just as interesting.

We discovered this little neighborhood because I wanted to see this church. It was locked but had an interesting story.

The neighborhood and the Church of Saint-Charles de Limoilou has been revitalized by the locals. The steps and area in front of the church have been transformed into a new public square, complete with community gardens, picnic tables, and a free wifi zone!

Another of several examples of building preservation and repurposing, a church on Rue Saint-Jean was repurposed into a neighborhood library.

The same was done with a favorite place we accidentally discovered. The first neogothic church in Québec City, Wesley Temple, was built in 1848 and has been repurposed into Maison de la Littérature, “a place for writing, creating, meeting, and participating—bringing literature to life in a lively, warm, and inviting setting.” It’s one of many special places we will remember when we remember Quebec!